In conjunction with the solo show "Rafael Lozano-Hemmer: Pulse"

Painting With Light 2018 – Festival of International Films on Art

Rafael Lozano-Hemmer is one of the most acclaimed artists working in public space, but his pieces wouldn’t exist without participation. Shot over 10 years in 17 countries, MEGALODEMOCRAT follows Rafael’s breakout career creating large-scale works that entice an increasingly isolated public into transforming their cities and reconnecting with one another.

The Public Art of Rafael Lozano‑Hemmer

The film opened the 36th International Festival of Films on Art in Montreal in front of 800 people and won "Best Canadian Film".

Rafael Lozano-Hemmer is one of the most acclaimed artists working today, but his pieces wouldn’t exist without public participation. MEGALODEMOCRAT explores Rafael’s quest to stage a democratic takeover of urban space. Shot over 10 years in 30 cities around the world, the film provides intimate access to his large-scale interactive creations in locations such as Trafalgar Square in London, the Vancouver Olympics and New York’s Park Avenue Tunnel, culminating in a piece that crosses the US-Mexico border. In our increasingly isolated lives, MEGALODEMOCRAT serves as an antidote to alienation: Rafael’s work is a rallying point for a screened-in urban population, longing to connect. His art doesn’t discriminate, and all who participate are given a voice. With that voice comes a sense of hope.

Benjamin Duffield is a Montreal-based filmmaker who works both sides of the street, directing and editing fiction and documentary films. Since graduating from the University of British Columbia with a B.A. in Film and Theatre in 1993 he has created award-winning film and television for the Canadian and American markets.

In 1996 he joined five filmmakers to make Yukonna, an expedition documentary on the Yukon River that retraced the prospectors’ journey a century ago. The film sold to National Geographic, won several awards and played on the CBC during their 1998 Canada Day celebrations.

More recent accomplishments include directing the sci-fi feature “Darwin” starring Nick Krause and Molly Parker which premiered at the 2016 Vancouver World Film Festival, co-directing the feature documentary “Singing in the Shadow: the Children of Rock Royalty”, and co-editing “Rumble: The Indians Who Rocked the World”, which won a Special Jury Prize for Masterful Storytelling at Sundance 2017 and a Canadian Screen Award for Best Film and Best Editing.

Rafael Lozano-Hemmer was born in Mexico City in 1967. In 1989 he received a B.SC. in Physical Chemistry from Concordia university in Montréal, Canada.

EXHIBITIONS. Recently the subject of solo exhibitions at the MUAC Museum in Mexico City, the San Francisco Museum of Modern Art and the Museum of Contemporary Art in Sydney, he was the first artist to officially represent Mexico at the Venice Biennale with a monographic exhibition at Palazzo Soranzo Van Axel in 2007. He has also shown at Art Biennials and Triennials in Havana, Istanbul, Kochi, Liverpool, Montréal, Moscow, New Orleans, New York ICP, Seville, Seoul, Shanghai, Singapore and Sydney.

COLLECTIONS. Collections holding his work include MoMA, Guggenheim and Museo del Barrio in New York, Tate and Science Museum in London, CIFO and PAMM in Miami, Jumex and MUAC in Mexico City, DAROS in Zurich, Borusan in Istanbul, 21st Century Museum of Art in Kanazawa, MAG in Manchester, SFMOMA in San Francisco, MONA in Hobart, ZKM in Karlsruhe, MAC and MBAM in Montréal, AGO in Toronto, National Gallery in Melbourne, SAM in Singapore, the Hirshhorn Museum in Washington D.C. and many others.

PUBLIC ART. His large-scale interactive installations have been commissioned for events such as the Millennium Celebrations in Mexico City (1999), the Cultural Capital of Europe in Rotterdam (2001), the UN World Summit of Cities in Lyon (2003), the opening of the YCAM Center in Japan (2003), the Expansion of the European Union in Dublin (2004), the memorial for the Tlatelolco Student Massacre in Mexico City (2008), the Winter Olympics in Vancouver (2010), and the pre-opening exhibition of the Guggenheim in Abu Dhabi (2015).

PERMANENT COMMISSIONS. Over two dozen permanent architectural pieces are currently being developed for public and private buildings around the World. Many of them are already operating such as ATT in Dallas, Science Museum in London, Amore Pacific Museum in Seoul, PHI Centre in Montréal and Fidelity Headquarters in Boston.

AWARDS. He has received two BAFTA British Academy Awards for Interactive Art in London, a Golden Nica at the Prix Ars Electronica in Austria, “Artist of the year” Rave Award from Wired Magazine, a Rockefeller fellowship, the Trophée des Lumières in Lyon, an International Bauhaus Award in Dessau, the Governor General’s Award in Canada and was named Compagnon des arts et des lettres in Québec. 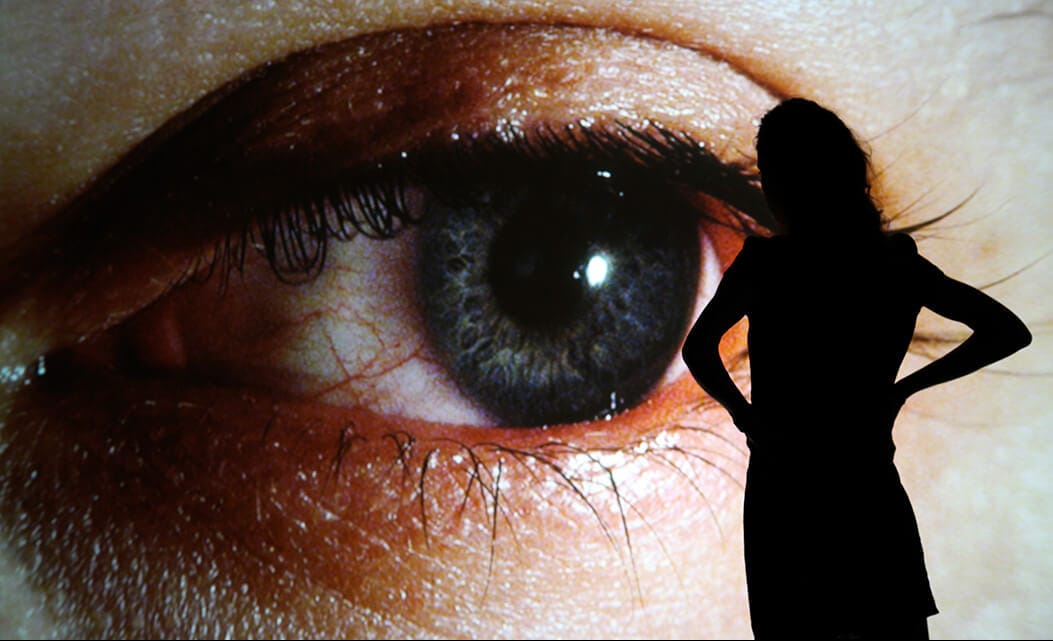 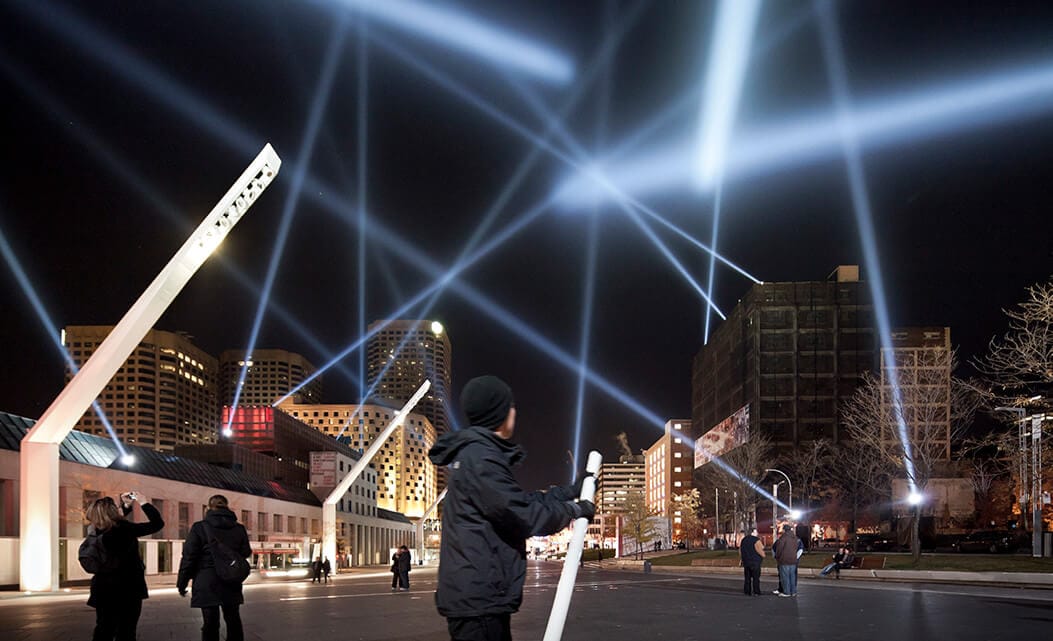 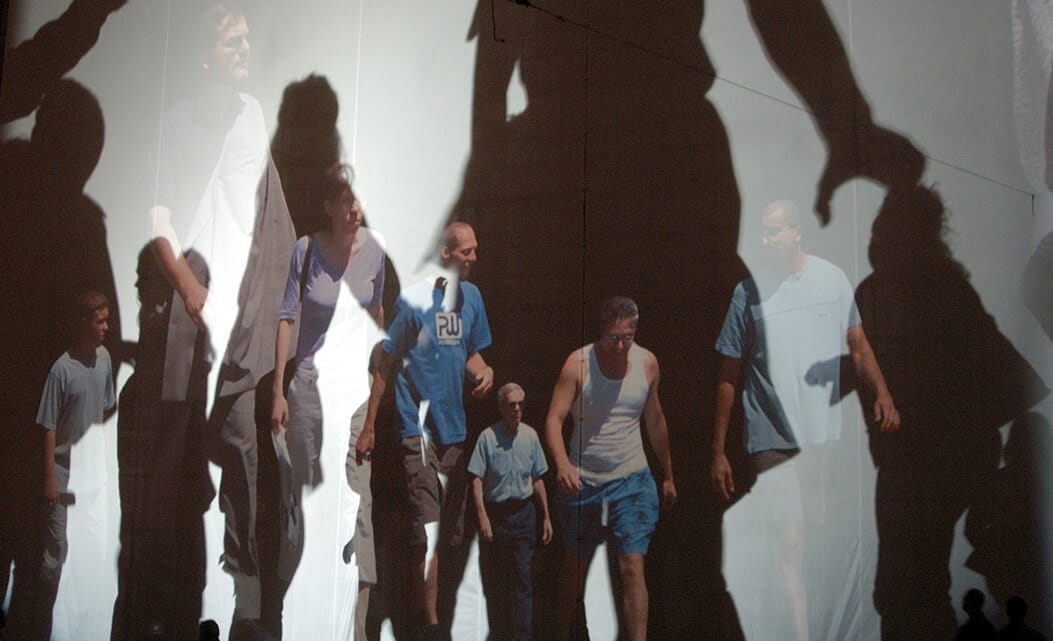 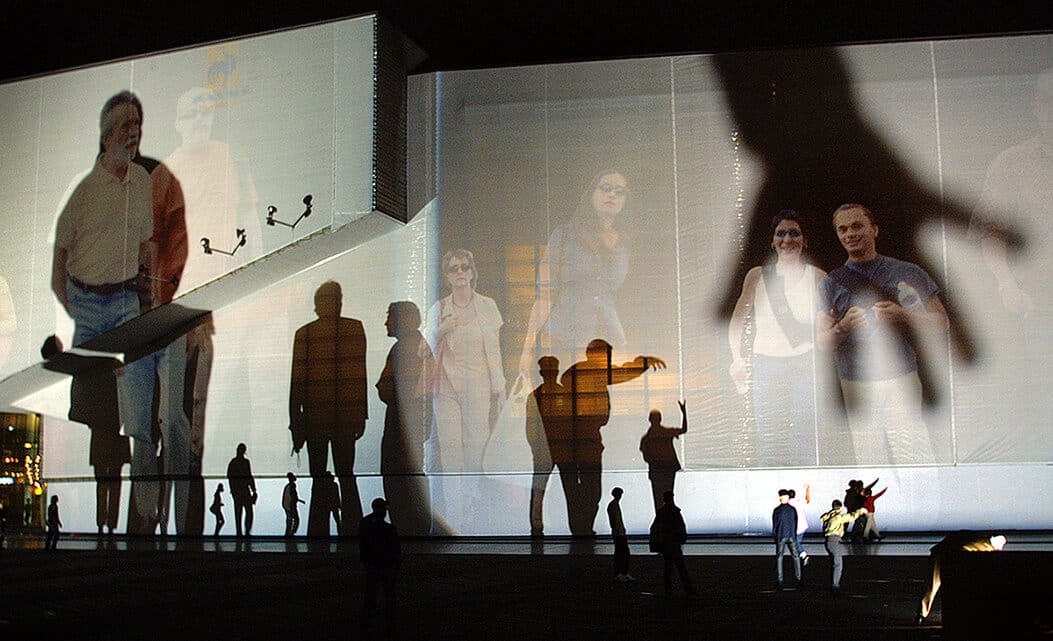 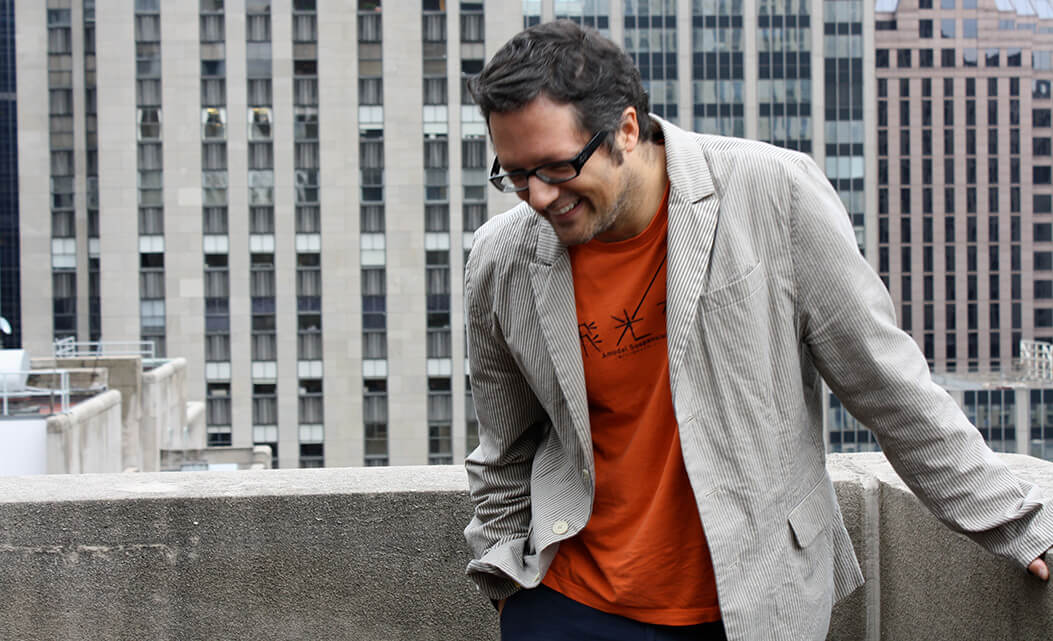 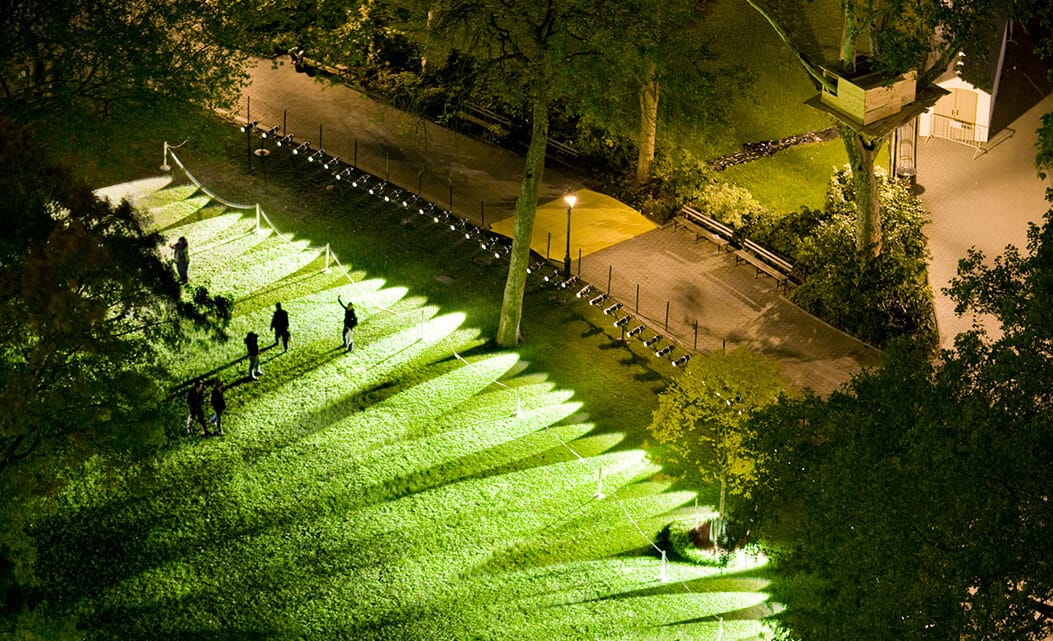 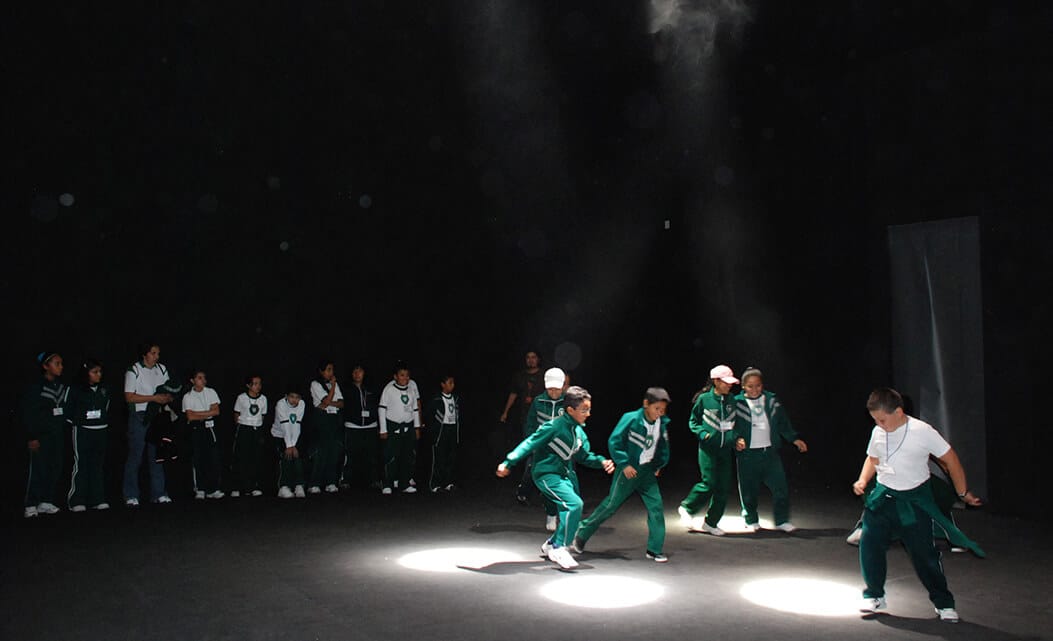 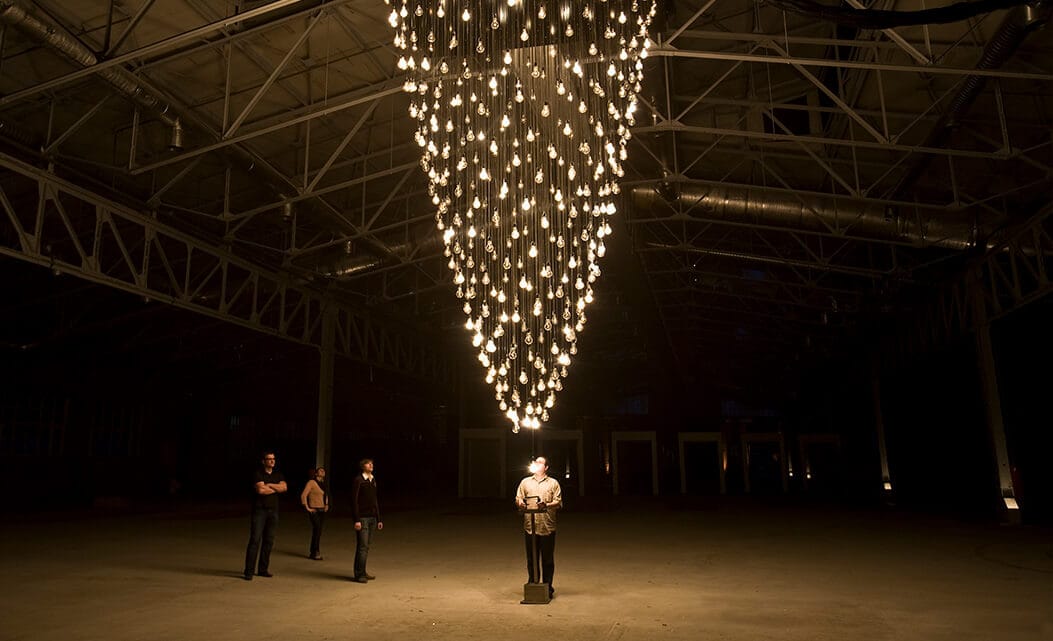 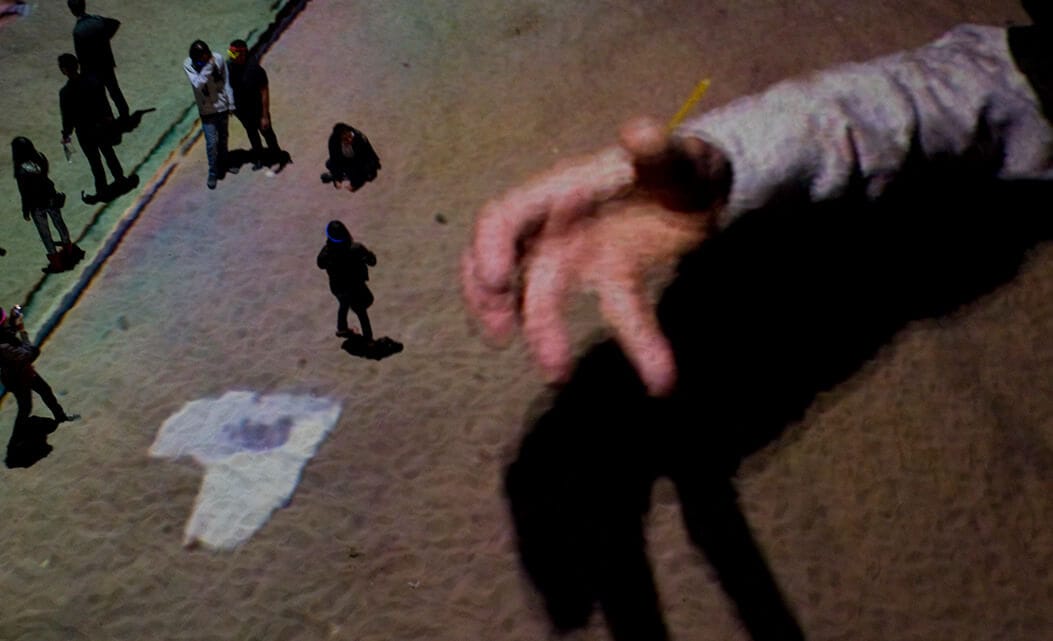 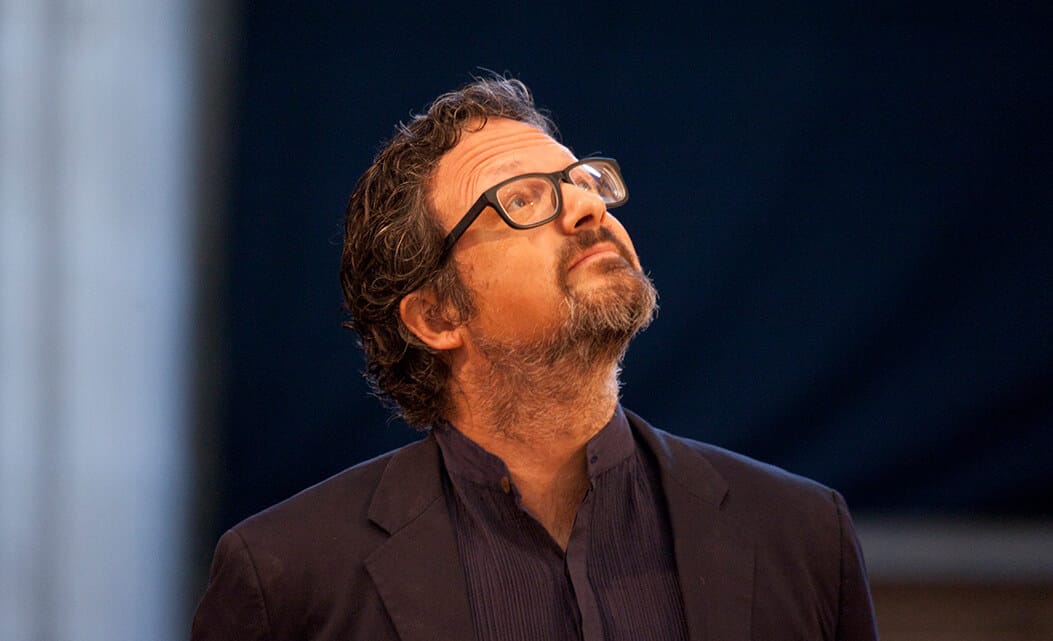 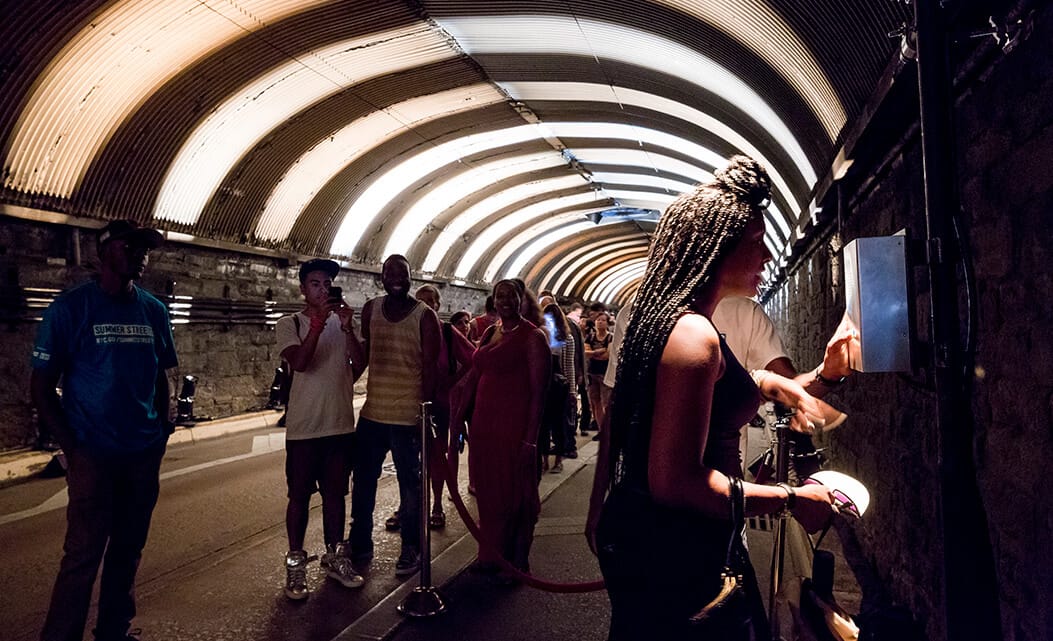 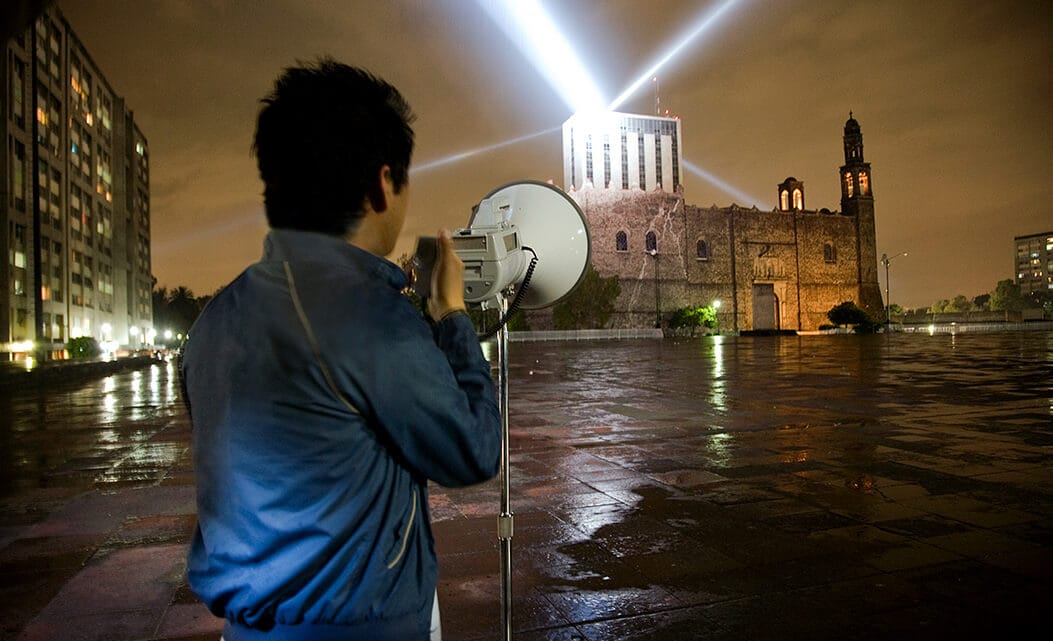 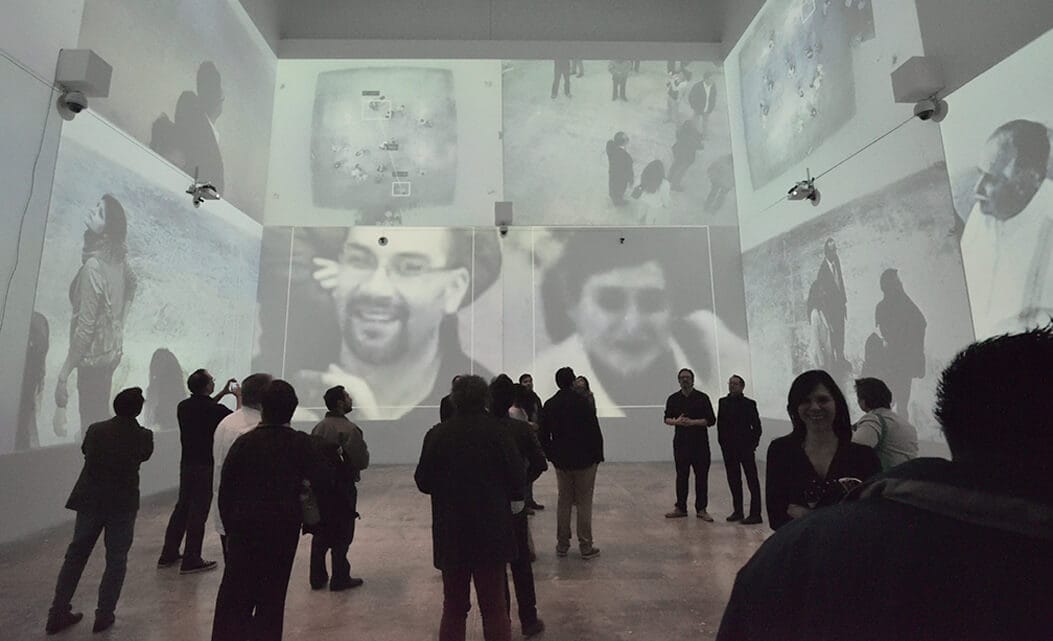 " Arguably the world’s most famous electronic artist. Lozano‑Hemmer is a “visitor virtuoso”... his exhibition perfectly embodies his idea that the crowd is the key to art."

Adam Gabatt The Times of London

" Lozano-Hemmer’s work shows the great range of human emotion on display. I feel twinges of Hogarth, the great 18th-century artist who held a vivid mirror up to English society."

" In Lozano-Hemmer’s exhibition our own petty lives have been transformed into a theatre of ever shifting electronic possibilities. We feel unnerved, diminished, troubled, excited."

" The virtue [of Lozano-Hemmer’s work] is that it elicits local character and galvanises a public."

" Lozano-Hemmer’s work requires us to reassess our notions of the analog and the digital, of language and code, meaning and force, human and nonhuman communication. But it does so not by commenting, critiquing, or sending a message itself. It does it aesthetically, by which I do not mean “beautifully” (although his installations always are that, too). Rather, I mean “aesthetic” in something closer to the etymological meaning: as in aesthesis, making sensible."

" A wizard at merging slick technology with high-brow art, Rafael Lozano-Hemmer is one of the faces of the future of art."

" His work demonstrates how computer technology can unite people in the way a hymn or an anthem does..... Lozano-Hemmer, a nephew of the poet Octavio Paz, is the son of nightclub owners, and his fascination with such playful poetry in the night sky is understandable. But it’s the subtle, proletariat, democratic power of the work that is so alluring."

" His work succeeds in giving the unchoreographed the power of a full orchestra."

" A remarkable artist whose international reputation was largely unknown in Paris – to our discredit."

" Rafael Lozano-Hemmer is a cyclone taking over the artworld."

" Extraordinary...Here is a work of art that reinvents the public sphere... one of the brightest social interventions in Latinamerican Art. I say this to transmit the excitement of participating in Lozano-Hemmer’s installation and experiment a new form of interaction alternative to the authoritarian space of mass media."

" Lozano-Hemmer, a Mexican-Canadian is a really interesting artist whose profile is being increasingly raised around the world and his art is something everyone can relate to."

" Lozano’s approach is both sober and outlying, running contrary to many of the expectations we commonly hold for a work of such an overtly political bent."